today after weeks of cold weather and biblical rain, we finally had a sunny day! So I graphed my chance to finally do some restyling. The small Pinus sylvestris of this post was during my 2005 vacation in Austria saved from a bulldozer! They were demolishing a large pine forest on the long road to the village where we stayed for the second year running to build a petrol station and trailer parking lots 😦  Underneed this tall and very dense pine forest in the lush vegetation grew tiny but old Pines. They stayed this small because of the lack of sunlight and were the perfect material for Bonsai! We knew this because we made long walks true this part of the forest the year before! So I asked the driver of the bulldozer in my best German if I could collect some of these poor little trees before the lumberjacks would chop down the tall Pines and the bulldozer flattened the small ones! He understood my prayer and said that it was alright as long as we stayed well away from where they were working! So we parked the car some hundred meters in front of that war zone and grabbed our collecting stuff from underneath the holiday luggage en started to surge for worthwhile trees that could be dug up with a reasonable chance to survive. We managed to save 6 or 7 before the machines came too close to being safe! The problem was then that we were there for a week plus an extra day for the travel back home and all this time these poor trees had to survive in plastic bags filled with wet sphagnum moss….this meant that after all only 4 survived that ordeal! This one was one of the lucky ones because I could simply scoop it off from a large boulder, so it had very flat and compact roots and survived without any problems! And now 12 years later it is the star of this little story.

Below: before removing the third-year-old needles. 36cm/14.4Inch. The new top section grew straight to the right and was bent back years ago with the help of in-water-sooked raffia and thick copper wire! Now after several growing seasons, the top section has filled out enough to form a nice top out off! 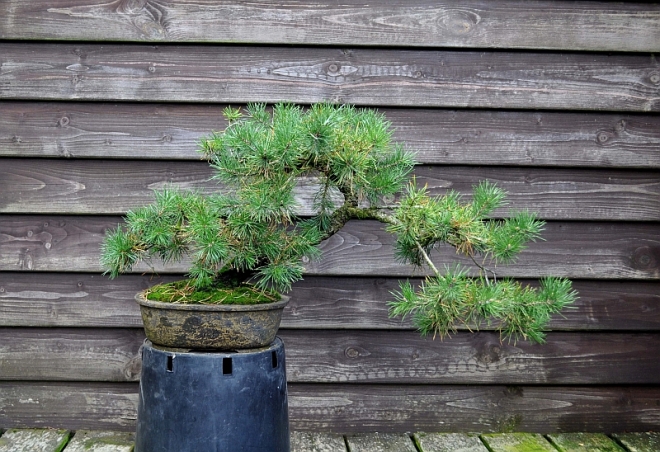 Below: After the old needles were removed. Now it is time to wire all the branches. 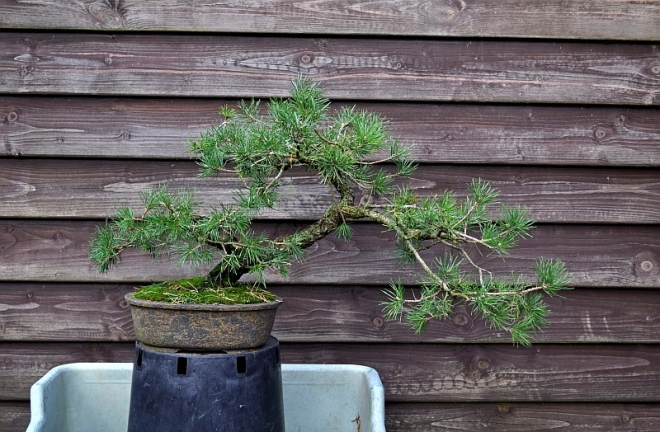 Below: The left branch is wired and more or less bent in position with all needle bundles facing upwards. 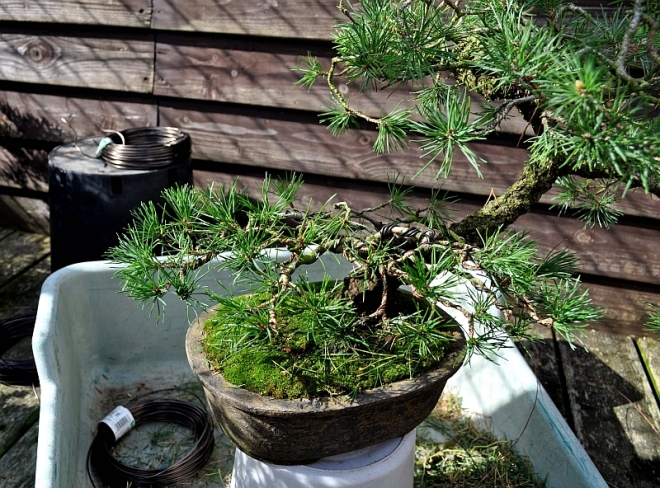 Below: the right cascading branch placed more or less in position. 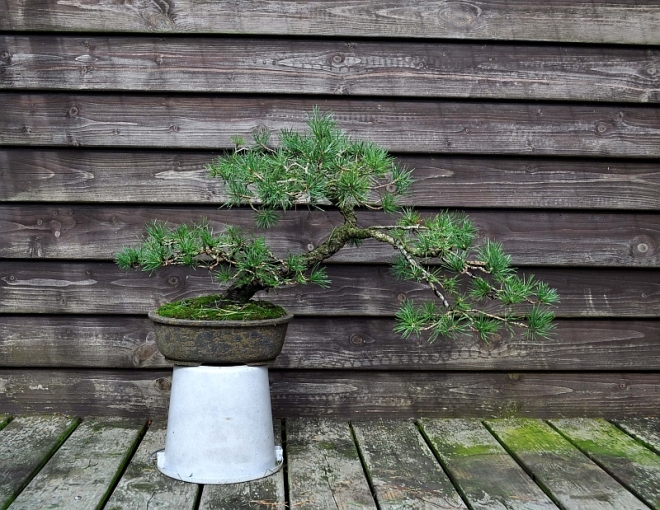 Below: Left part of the top is more or less in position. The new top is raised upward considerably with two 3mm wires! 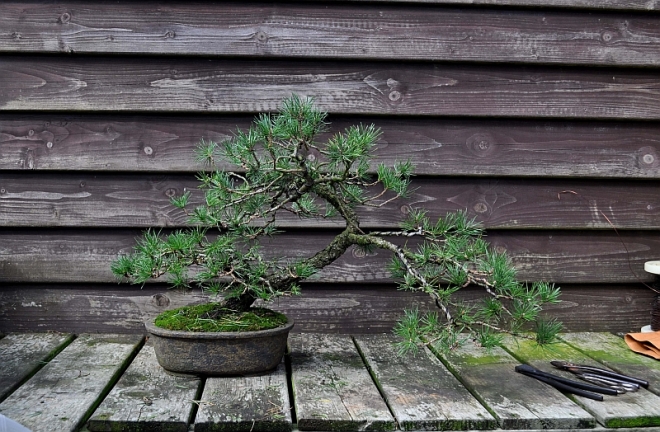 Below: slowly getting there…I love to solve these natural puzzles with a nice design! 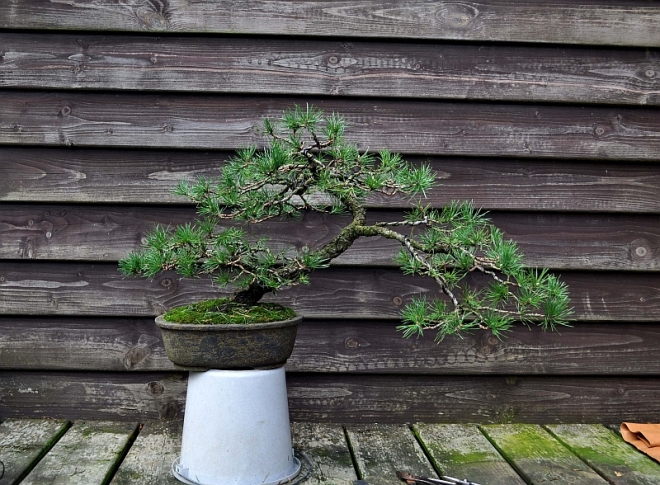 Below: Finished for now! I am happy with this result for now. In a few years’ time when the cascading branch has filled out some more, it will most likely be shortened and made less heavy…but that will be up to its new owner because it is up for sale and probably will go to a good home off one of my students?! 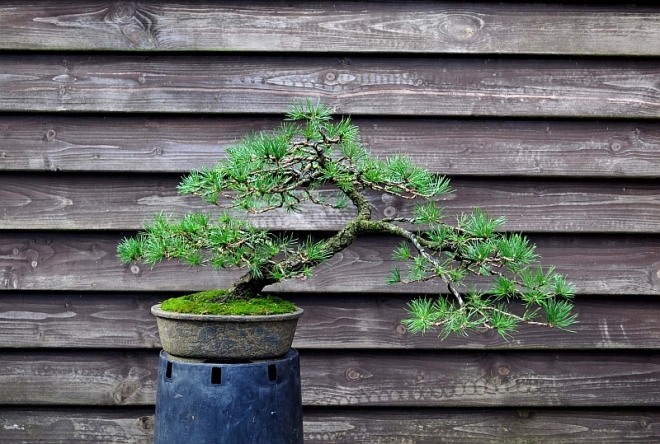 Below: close-up of the nice root base, lovely old bark and natural (still brown-coloured) Shari. 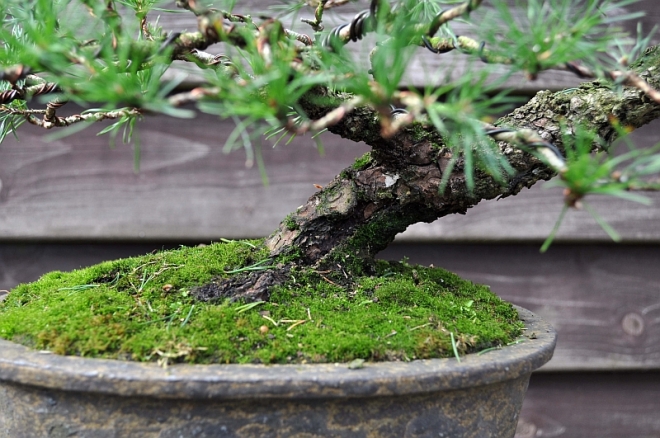 Below: close-up of the nice old and cracked bark. 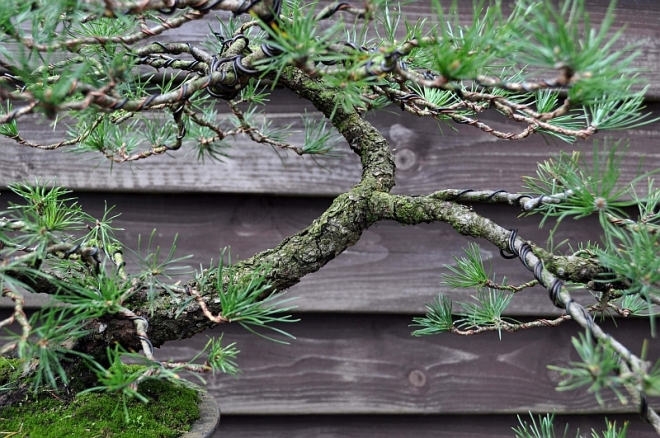 I hope you enjoyed this little story about the life of a saved little big Bonsai?!