remember I told you about those Itoigawa cutting that I have been collecting from 3 original cuttings over the last 6 years? Well here is what happened to one of those tree original cuttings. In 2005 I attached it to a beautiful piece of  Yew deadwood. This deadwood is what was left of a yamadori that sadly did not make it after collecting. But I did not want to throw such a natural sculpture away, instead, I used it to make a Tanuki. The deadwood and the Itoigawacutting were merged in early 2005. The pictures below are from November that same year.

Above:  First a groove was made, just big enough for the cutting to be squished in to. Then the cutting was planted, leaning to the right, in the armpit of the deadwood that forms the base of the tree. Both the deadwood and the cutting were tightly secured in the pot and then the soil was added. Then the still bendable gutting was pushed into the groove and it was such a good fit, that no wire was necessary to hold it into place!

Above: The beginning is there!

Above: September 2010, the shape that I was seeking is starting to come through.

Above: Close up of the amazing deadwood. 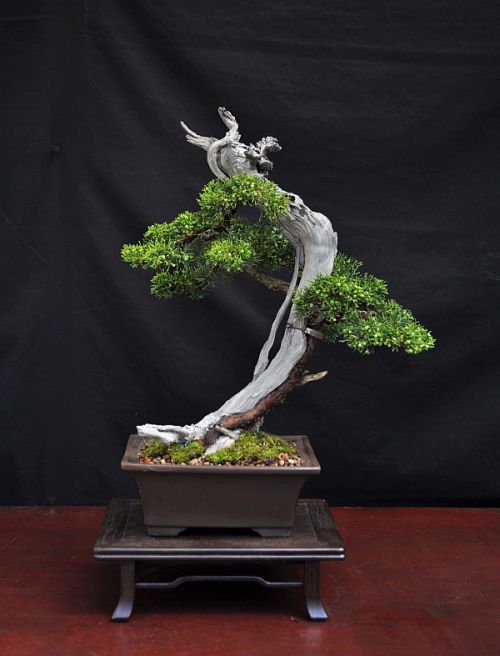 Above: Yesterday, and this is how it looks now. The main branches and a few of the smaller ones were wired and placed in the desired position. Then the deadwood was cleaned and treated with Lime Sulfur. And finally, the tree was repotted into the same pot but in a slightly different position. I think that this pot suits this tree very well! This small Tanuki needs more growth to get optimal branch structure. But for now, I am really pleased with how it looks. And I am very happy that all those years ago I decided not to throw this beautiful piece of deadwood away! I think it is becoming a really elegant Bonsai.

One thought on “TANUKI FUN.”