I would like to share with you some before and after shots of my Juniperus Chinensis that  I named “The Italian”.  You will find out why I named it that way in the next story! This tree and me go back a long time! In ’95 or ’96 I  joined Farrand and Rene (today owners of the Bonsai focus magazine) and three other Bonsai enthusiasts to drive in a rented bus all the way to Italy to see Kimura demonstrating for two day’s. We stayed that weekend in a very posh hotel, were after a great banquet, we even spend some drinking and fun time with the Master himself! Later that night he asked me to roll him a “Dutch tobacco” cigarette, like the ones  my travel companions were smoking. I rolled him one and he took a puff and then he turned green and started coughing for ten minutes! 🙂 But that’s a other story! Before all that, we spend a day in the famous Crespi Bonsai centre in Milan. As a group, we were able to buy trees there that later would be shipped to us. Walking through all these greenhouses, filled with all these amazing imported trees, was a dream come through.  It was there that I saw the juniper from this story for the first time and although it was not really my taste in Bonsai (even then!), I fell for the quirky curves in the lower section of this tree! Because it was not prized I had to ask for the prize. Than I was told that the tree was styled by Kaneko during a demonstration the year before!  And that was noticeable in the price!! But business was good that year for me so I bought the tree, together with two other trees,  regardless of the prize! I think now that I bought it then, because material like this was pretty rare in those early years in our parts of the world! And it was the first change I had to by such quality material from Japan! And I wanted to have at least one more traditionally styled Bonsai in my collection! And today together with a imported shohin Itoigawa they still are the only two imported Junipers  in my collection! So now you understand were this Juni gets it name from, “The Italian”!

Since then I restyled the tree several times, removed the main bottom branch and about ten years ago I planted it in a lovely old shallow pot, where it lived happily for many years. But about five years ago the tree started to lose its normal health. So I repotted it into a deeper pot and it took me up to now to get it back to grow abundantly again! So I felt it was safe to give it a gentle restyling again!

Below: The oldest picture that I could find in a hurry! It was made in July 2006. Here the Italian is still in its old shallow pot and the straight first branch on the left and the long thin front branch is still on the tree!

Below: Before the work started. The problem was always that awkward placed first branch on the left! It crosses over the trunk and I have no idea why they decided to do that all those years ago? Removing it in the future is an option but that would also mean that I would lose that beautiful live vain that swirls across the front of the tree! I might decide to do so in the future, but for now, I will still use that branch in the design that I am after! Just above that first left branch, where you can just see two lines of cut paste on the trunk, is where last year I created the start of a new Shari that runs upwards to the top. This was don to bring some more interest to that only straight part of the whole tree. 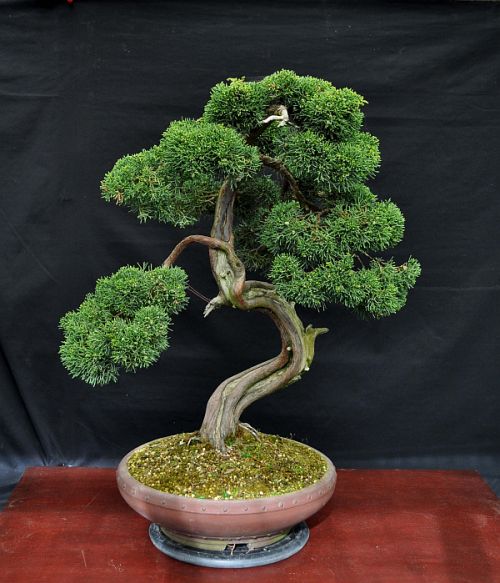 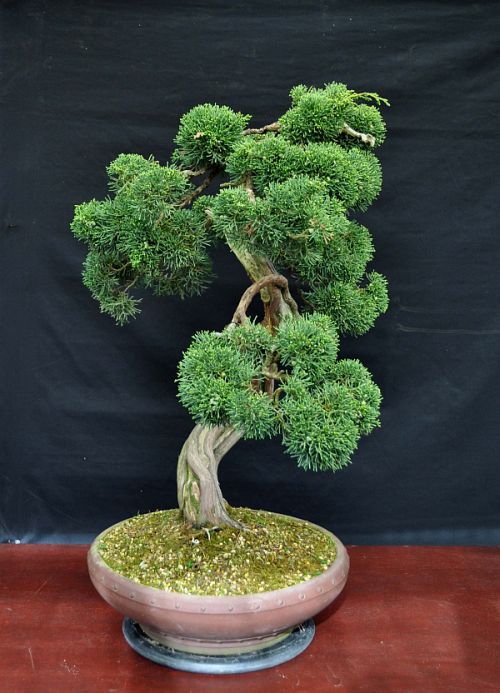 The first thing to do was cleaning the bark and the deadwood of the whole tree with different sized brushes and sandpaper. Than the deadwood was treated with lime sulphur. And then the whole tree was wired and the branches brought into there new position. Then finally, to make the contrast between live and dead even more obvious, the bark was coated with a mixture of water with a few drops of vegetable oil in it!  In the near future the brightness of the bleached deadwood will tone down en will look more natural. Which is more to my taste! The foliage is not thinned out and plucked as much as I would do with a healthier specimen, so it looks a bit fluffy. But I don’t want to risk the health of this old friend. If he reacts good to this styling, I will thin it out later this season to bring out more detail in the foliage layers.

Below: The end result for now. The balance needs to improve in the future, to realize that I need more foliage on the left top side side of the tree. The left lower branch needs to fill out some more, to obscure the top boring part of that same branch.In the top you can just see something light brown in the foliage. This is a piece of wood that holds up the top. But for now I am really pleased with the outcome! And I am really glad that my friend “the Italian” has overcome his struggles and is thriving again! I look forward to the day that I can pot him back into his old shallow pot!