A few days ago I did some serious branch shortening and some branch replacement on this Ficus benjamina you see in the picture below. There is no wirring in this tree, only some to pull some branches down were used. I bought it some 15 years ago as a 7 inch high seedling at our local supermarket. It wasn’t much thicker than my pinkie back then, now the tree base is almost as thick as my wrist. Back home I planted it on a beautiful moon rock that I found at a local garden centre, leading the small root over the rock and through the holes and then I covered the rock and the roots completely with soil. I wanted to create the image I had seen on pictures of those large Ficus trees that grow over rocks and ruins in the jungle. After about half a year I started to remove a small layer of soil from the top, exposing the roots to the air and light. After a year or 2 all the roots were completely freed from the dark. During all this time the Ficus stood inside the house in my living room. Even now the tree spends about 8 months inside our house under need a window in the attic. Only the 3 warmest months in the Dutch Summer are warm enough to keep it outside during the night. And it is way to heavy to lift it inside the house every time it gets to cold! So naturally this Ficus is way less vigorous and grows much slower in Holland than it would do in the warm and moist climate of the tropics and there for it took the roots of this Ficus more than a decade to thicken enough to look believable. This tree is not really that good yet, but it is one of those trees you just can’t let go, it has become a part of the family! 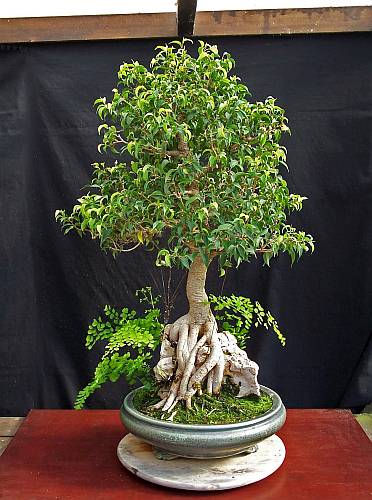 Above: Anyway, some 15 years ago the small scrub you see growing next to the base of this Ficus arrived out of now were, and it has since then lived as it’s partner on this rock. I only had to cut them too long stems every now and then, to keep the growth in check. But this time I decided to remove most of it completely from the back side of this rock, because during all these years this scrub had completely overgrown most of the roots on the back side, with a thick layer of old and new plant stems,  covering them just like a thick layer of soil would have don! It was actually the first time, in a long time, I could see these roots on the backside. And to my surprise, I discovered something that proves the theory that says: that roots exposed to light and air, grow faster and thicker. Now I know that there are more roots on the front side than there are on the back side, but if you look at the close up of the front and back side, I think, the difference in the thickness is too much to ignore! 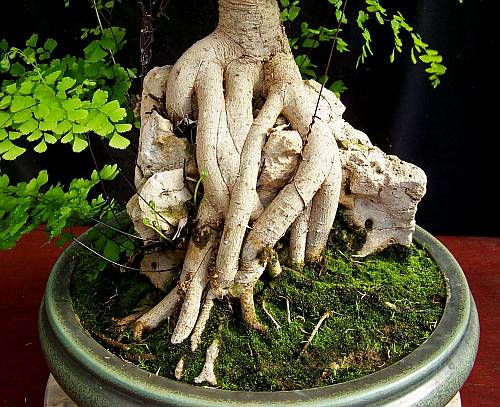 Above: Front side of the tree. All roots are at least twice as thick as the ones on the back! 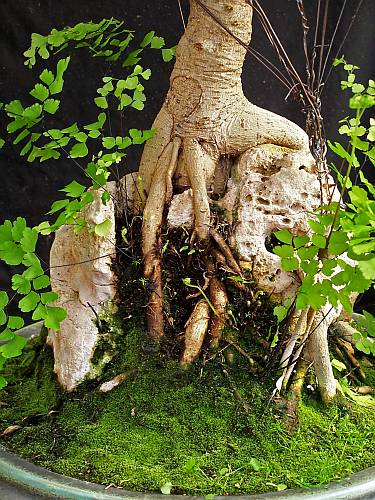 Above: Thinner and much weaker roots on the back side. The black area you can still see on the rock between the roots are the remains from the scrubs I removed. I find this difference truly remarkable and that is why I wanted to share it with you all! What do you think?

4 thoughts on “ROOTS DO GROW FASTER WHEN THEY ARE EXPOSED ABOVE THE GROUND!”