yesterday my Bonsai friend Dirk Mundorf from Germany drove more than 3 hours to see my Bonsai and to work on the urban Yamadori Yew (Taxus baccata) he brought along. He promptly arrived at 10 in the morning, which is pretty impressive if you realise that I live here for almost 20 years now and still get lost every now and then. We had a few coffee’s, wile we looked at and discussed my Bonsai and than it was time for Dirk to bring in his surprisingly heavy Yew. After we had prepared everything to get started, I first asked Dirk what his ideas for this future Bonsai were? I always do this when someone is asking me to help them with the styling of their tree. It is all too easy to push forward my own ideas and style, but by doing so, I might be destroying someone’s unique vision of  beauty in Bonsai! Listening to Dirk, I soon found out that he had a good eye for discovering the possibilities of this  Yew. Although Dirk is doing Bonsai for a relatively short time, he has all ready clear ideas about what he likes in Bonsai. So it is up to me to encourage his ideas and help him to realise his own sense of beauty in this tree. Than we both looked and discussed, if his general ideas for this Yew were doable?

Above: While keeping  in mind Dirk’s own ideas for his future Bonsai, I made a quick drawings of what I thought was possible with this tree. After discussing this possible design, Dirk felt that the first branch should be closer to the trunk line, making the tree more compact. 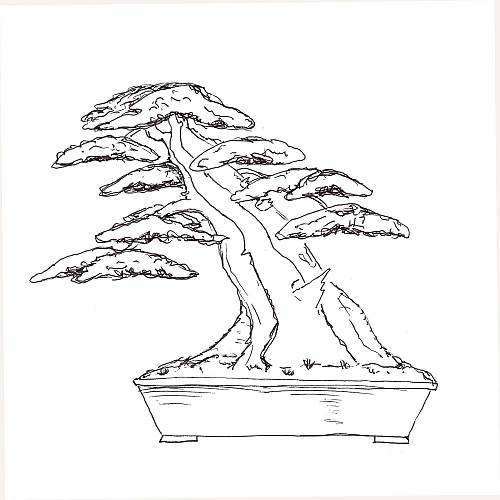 Above: So I made this second one, with a shorter and closer to the trunk placed first branch. We both agreed that this design was the fare better one of the two and that this was more or less the desired design we would try to archive.  So now we were ready to really start some working!

Dirk asked me if we should start with improving and creating new deadwood? To his surprise I sad no. I think it is better to first style your tree and than work on styling your deadwood. You should be absolutely certain about what you want, before you style your deadwood, because what you do, is mostly in reversible! And after the first styling when the  image/outlines of your future Bonsai are more or less there in frond of you to see, it is much easier to style the perfect deadwood to go along with it!

But before we go any further with this story, I would like to share 5 before pictures of this yew, that Dirk made a few weeks ago. 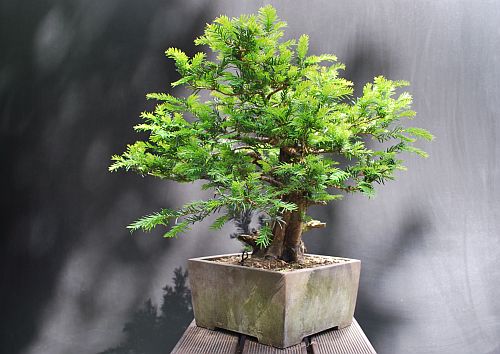 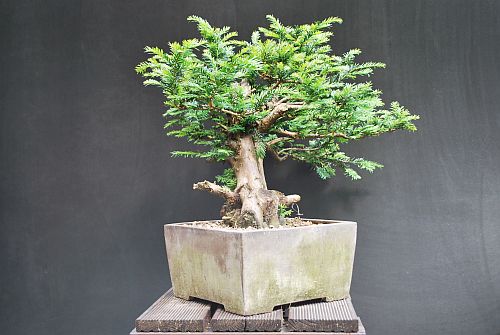 OK, lets go on with the story.

Wile I was preparing the raffia that was needed to bend a thick branch, Dirk started to remove everything  unwanted  from the tree. This make it easy er to work and to clearly see what you are doing! But we would leave as much foliage as possible on the tree to make sure it would not suffer to much from this first styling and recover quickly.

This is how the tree looked at the beginning of its first styling. Dirk is cleaning up the tree, removing everything that is not of any use fore the planed design.

Dirk hard at work, bravely removing all unwanted branches. But leaving more than enough foliage to secure the health of the tree. 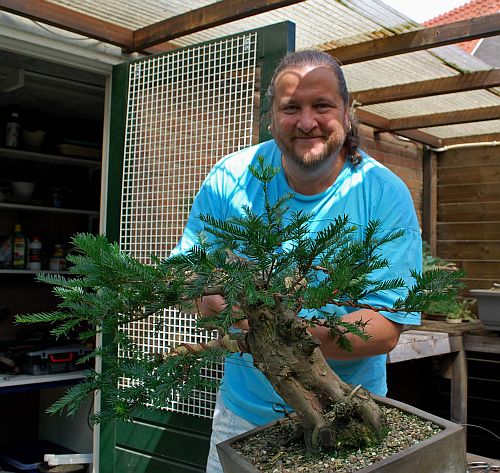 Sunshine, good company and Bonsai. That’s live for me! 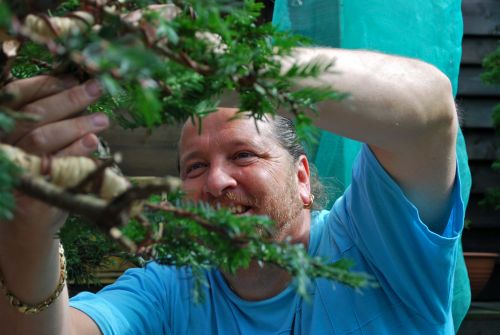 It was good for me as well to finally do some real Bonsai styling again!

The end result after a day of hard but pleasant hard work. I think this tree has a great future ahead! Next spring it will be repotted by Dirk and then, when it shows all signs of recovery, it is time to start thinking about creating a beautiful Shari that runs from the root base of this massive tree, all the way up to the deadwood on the top. Making this already a good looking tree, really impressive and special!

Dirk proudly standing next to his very promising pre-Bonsai. It was a great pleasure to work with Dirk on his tree.  A memorable day indeed!

Here is the link to Dirk Mundorf Bonsai Blog.

* pictures of me are made by Dirk.

3 thoughts on “A GREAT BONSAI DAY IN MY GARDEN!”