GREAT NEWS!!! On Saturday 26 May 2018 Danny & Ingrid Use from Bonsai center “GINKGO” in Laarne Belgium will stage the second edition of the amazing “KEI BONSAI KAI” TEN and TEN “DANNY USE & FRIENDS” in Laarne Belgium!!! First of all there is Danny’s huge world class private collection to see and like in the first very amazing edition in 2016 Danny his loyal students from “KEI BONSAI KAI” will show literally hundreds of there best Bonsai in amazing arrangements through out the whole “Ginkgo” Bonsai center! And like if that would be not enough?! Just like before Danny also invited many of his old Bonsai friends from the famous and legendary “GINKGO BONSAI AWARDS” series  to show there best work!!! And I am once again very honored and proud to say that I am one of them! 🙂 This great news was told to me last week when after a to long time I finally was able to visit my old and dear friends Danny and Ingrid again in their wonderful Bonsai center! 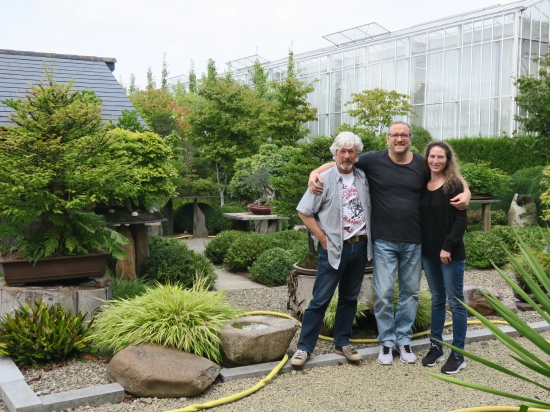 As always we were warmly welcomed as lost friends and during a cordial conversation and coffee Danny told me about his plans for the new Show and invited me to be a part of it again. Well I wholeheartedly sad YES!!! I WOULD LOVE TO!!! Even if this upcoming edition is half the success and the fun of the first one…well than I would still love to be a part of it all!!! If you love Bonsai? Well than you simply cant afford to miss out on this opportunity to visit this amazing “GINKGO” Bonsai center were everything you ever need or want in Bonsai is for sale + the change to see hundreds of some of the best Bonsai in Europe!!! Ow and did  I mentioned that there is a hug indoors rebuild wooden american roadhouse bar for drinks and snacks!!! 😉  I hope to see and meet you all there!

Here you can see two video’s that I shot during the first edition in 2016: