here are the pictures from the repotting of Wolfie the Mugo pine.

About a year ago I noticed that Wolfie was slowly falling over to the left! On closer inspection what was causing this, I discovered that the thick root on the right side of the trunk (red arrow) was completely rotten and could not hold the pulling weight of the tree any longer. Wolfie was supported with a piece of wood to prevent it from falling over and to save the roots that were still trying to hold it in place!

Close up from the right side of the rotted root and trunk from which the dead bark was removed. No wonder that Wolfie was slowly tipping over to the left! There was not much left to hold him upright at all! 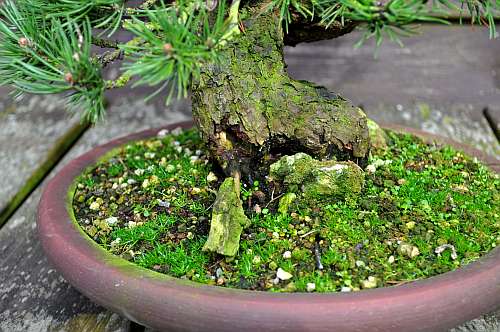 Close up of the rotted area from further to the right side. Notice the natural rock on the right side of the dead root that is embedded in the trunk and in the soil.

With a concave cutter, the rotted root was cut off. If you look at the space above the embedded rock you can see just how much Wolfie has fallen over! That rock use to fit tightly in the truck above it! 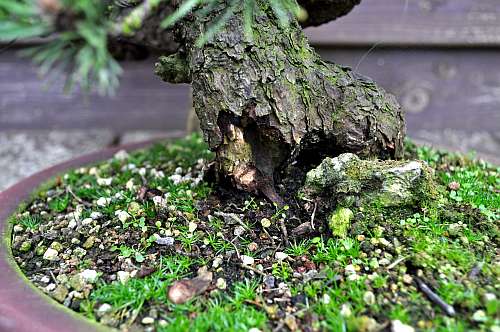 Here you can see that the dead root is cut off. Now all the rotted wood needs to be carefully removed and treated to prevent further rotting in the future, making sure that the stone I found still fits the wound!

The red arrows show a stone that I by luck found in the soil of my Prunus mahaleb yamadori from Slovenia when I was wiring it this spring. I immediately knew it would fit in the wound that would be created when I removed the rotted root from Wolfie!

Man, I could not believe my luck, it fits like a clove! It looks like Wolfie has grown against this rock his whole life! And it makes the base of the truck look so much wider! Big problem solved! What are the chances of finding this rock in a pot of another yamadori that I found years later in another part of the world…AMAZING!

Here is Wolfie in its new pot after a difficult repotting! securing it to the pot needed some thinking and trickery! A screw was placed out of side between the new rock and the old original small rock on the right of it from which a thick wire was secured through the hole of the pot! This wire was tightened until Wolfie was in the right position and prevents Wolfie from falling over to the left again!

I hope you forgive me that this post is a bit messy but I have a lot of trouble posting these days…but I still wanted to share my work with you all after all this time! I will post a picture of Wolfie after it’s been in his new pot for a while!