I made some pictures of two of my Hawthorns now they were still showing there lovely flowers! But only just, with every little shake it started to snow a little so I had to be careful! The first one is from my old little Hawthorn in its new smaller Dan Barton pot. I always loved the former combo with the beautiful Horst Heinzlreiter pot that I won in a online styling competition, especially when it was in bloom! But it was a bit to heavy and overpowering during the leafless winter period. During the last repotting I found out that it easily fitted in to the slightly smaller and shallower Dan Barton pot, so that was a no brainier! Now the tree is more equal to the pot and looks much bigger, taller and further away than before! Dan Barton gave me this stunning pot as a surprise gift the last time I stayed in his warm house so I am glad that I found the right tree for his beautiful pot, I hope Dansai likes it as much as I do?! 😉 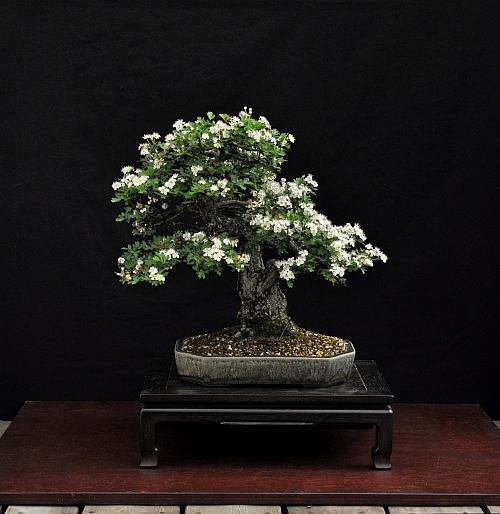 This rare “Dutch” Hawthorn Yamadori that I collected some were in early 2000 close to where I live near the beach had some difficult to solve problems, like no branches on the lower part of its trunk and hardly any movement on the whole trunk! So I had to create a whole new top area out off new branches that had grown from a thick inverse tapered top stump. This is the drawing that I made for it back in 2005, it’s my take on a “Mother and Child” design! I all way’s wanted one so here was my change and challenge to create one!

Out off a branch that grew from the right bottom section I created a small leaning tree, like a little child that clings on to his towering mother seeking protection from the storm! How poetic! 🙂 It even has it’s little arm around her legs! This way I created some things of interest on and around an otherwise boringly empty and straight trunk line! The straight (like a stick) natural deadwood section along most of the trunk line was shaped with use of a concave cutter. I managed to create the illusion of movement by just removing and breaking off the hard deadwood. Now the trunk has some flow to it and is interesting to look at. 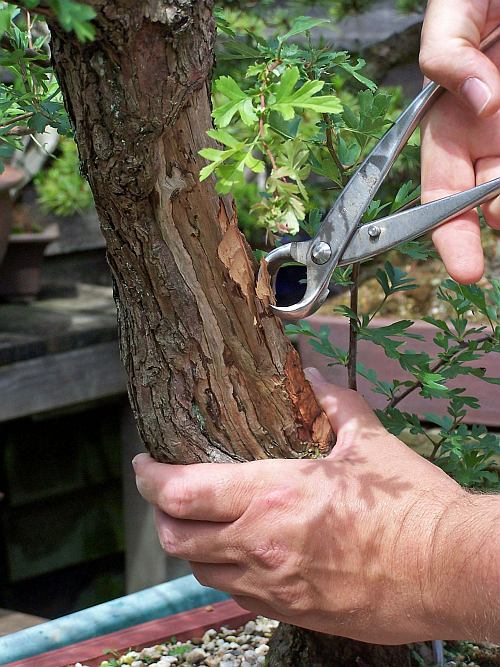 The yellow line better shows the movement of bark and trunk. No more straight section!

And in the present time! The basic shape is already there, now it needs more branch structure to fill out the silhouette. It never had this many flowers and looks and smell great! It has lots of flows, but tons of character, in a year or 5 it will be ready to show (I hope)! 🙂

Something like this is what I see! A fantasy Bonsai?! 😉 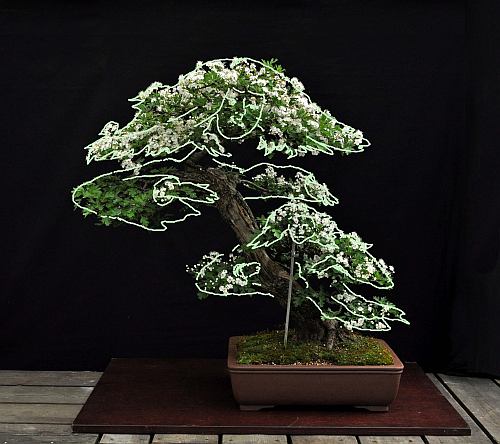 Hope you enjoyed the pictures?!