Marcus Watts from the UK wrote on the IBC forum:

thats more like a demo – small crowd and a few
beers – what a refreshing way to style a tree Hans, keeping a ‘plan B’ branch in
case the one that was styled dies – in my mind details like that, actually
caring for the owners material, sets you apart from many of today’s stylists
where the instant ‘finished in a day’ image seems to be all that matters.
it looked like you had a good time, cheers
Marcus.

Thanks, Marcus,
during a workshop, I will always ask what ideas the owner has for his tree. If they have one or two, I will look if what they see in their tree is possible to achieve! If it is possible but there are better options with their idea in mind that I will explain that to them. If their idea is not doable I will explain why. If I see a better design for their tree than I will try to explain why I believe that is so, but I will still not enforce my idea or style on them. I really believe that a teacher should cherish and nourish the ideas that students have of their own! Students, especially the ones that are not too experienced yet, must be allowed to form their own imagination and way of styling. Otherwise, we will only end up with a lot of bonsai that look like the one that the teacher makes at home and that is simply wrong!
The demo, on the other hand, was a different story! Nik Rozman the owner of the demo tree, kindly allowed me to style his precious Pine in my own way! This way I could show how I work in my own garden on my own trees! Because of the terrible rain when I selected this pine in his garden, I had only seen it for just a couple of minutes. I selected it because of the movement of the trunk, but I did not have the change of forming an idea what to do with all those long branches?! So I started the demo with a blank canvas in my mind! What I did know was that no matter what design I would choose, I had to bring that thick trunk and foliage much closer to the trunk! So I started to apply wet raffia and heavy wire to be able to bend that thick trunk and some of the thicker branches! While I was doing this I went through a lot off possibility in my mind, but still did not have a fixed plan after the raffia and wire were in place! So I slowly started to bend the thick trunk as closely as possible to the trunk, while Nik was tightening all the gi wires for me! After having done that successfully I brought the lowest branch more or less in the desired position and than I suddenly saw the light and the future design for this tree! While holding that branch into place close to the trunk I looked up and smiled at the audience and said do you see that? And they all did! There was the possibility for a compact little Pine! I told them that I would only use two small branches and that this would mean that the rest of the branches would be cut off or shaped into Jin’s! So I asked Nik if it was alright to make his tree in this way?! He said it is your demo and I replied, but it is our tree! So he smartly suggested, make your image of a small tree out of just those two branches and when it works and it looks good then you can remove all those unnecessary branches! If it doesn’t look good you can go for the larger tree option with the branches that were left on the tree! Clever Boy!!!

So I started to bring the two branches into their places and when I was finally satisfied with their position I again ask Nik and the audience if this design was good enough to remove all those unwanted branches? I think they all agreed it was a good design and so did Nik, but at his request on a branch in the left top was saved as an insurance policy if things would go wrong! Again a smart idea by Nik! So I removed all unwanted branches but one and then started to shape the deadwood! So the end result of this little Pine is not only my work because I would not have been able to style this tree in this way without the trust and the permission of Nik! Here are some pictures of that demo and the end result.

Below: Ooooops I have no clue! 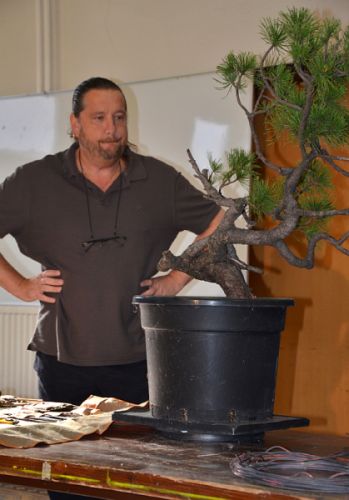 Below: The planed front of the tree.

Below:: Removing the bark from future Jin’s. Someone asked me why don’t you use power tools? I explained that doing this by hand gave me the time to bond with the tree. Giving me the change to come up with solutions and a design! Doing this with power tools needs a lot of concentration and then there is not much room for other thought! 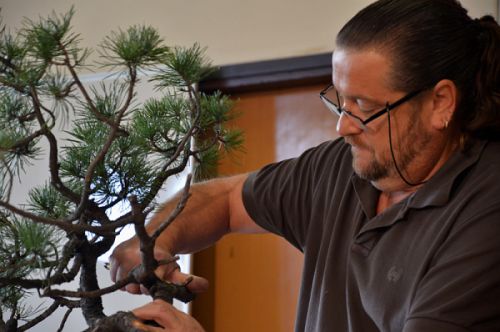 Below: Wiring and power tools put a lot of pressure on a tree so before I started I tightened the tree to the rim of this training pot. 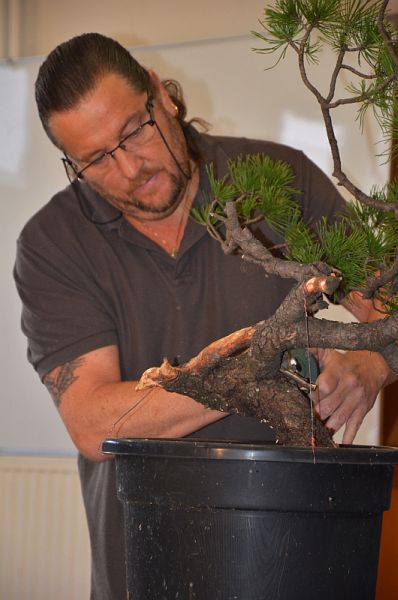 Below: Bringing the branches and foliage in place. Just look how fare the thick trunk is bend!

Below: The last small branch is poet into place!

Below: The end result. The long branch that is sticking upward is the one that is saved for extra security! 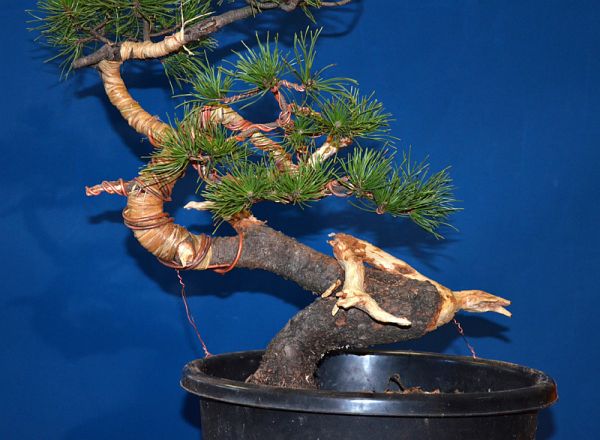 It’s a shame that the nice wide base of the tree is not visible in this picture,
but I hope you can get the idea behind this design from it?!
Cheers,
Hans van Meer.