remember last year 29-4-2016 when I told you all about my plan to air layer a thick and old second trunk of my large Prunus mahaleb Yamadori that I collected a few years ago with my dear friends from Slovenia in Slovenia?!

Below: The red line shows the original massive trunk of the tree that would stay with me in Holland after the separation of the thick second branch ( yellow line). This branch section would be given later to my old Bonsai friend Tony Tickle to say thanks for all he has done for me over the last two decade! I can easily say that I would not have been where I am now in Bonsai without the help of Tony! He took me on my first Yamadori trips and arranged many demo’s and workshop abroad for me! Just to name a few: the E.B.A in Stratford (UK) , 2 times Joy of Bonsai in Bath (UK) and last but not least 4 times at his own Bonsai extravaganza weekend workshop in Burrs (UK)! 6 of my best Bonsai that I have shown in many prestigious events, like the Ginkgo’s shows and the Noelanders trophy, I have because of Tony’s kindness….so I am finally glad that I can give something special back to this important friend of mine!!!

Below: This is how the marcot/air layer looked that day. 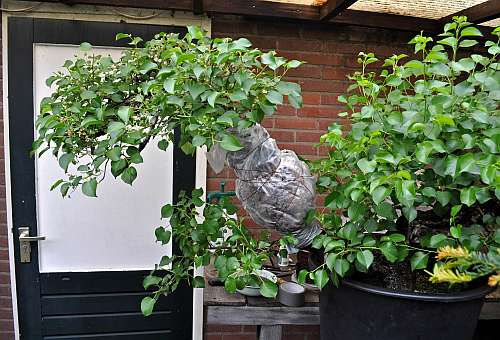 Below: on 28-7-2016, just over 2 months later there were lots of new roots to see pushing against the plastic bag! So it was already time to separate the branch from the tree!

Below: I left the plastic on there to protect the fragile roots! With a saw and a bit anxious the branch was cut off! This took surprisingly long because the branch consists out of 75 percent hard deadwood!

Below: Finally finished! Only the duck tape was holding the branch in place here! The here still thin and young branch you see beneath the cut will play an important part in my design of the original tree! But that is another story!

Below: Just before the marcot is planted into it’s new temporary home. Just look at all those strong new roots! I could not be happier!

Below: The sphagnum moss was kept on there and the pot was filled with a mixture of: Akadama, Kiryu, Bims en regular rough garden soil. It was not possible to secure the new tree in the regular way, so I tied it down with wire and hooks around the pot rim. And watered it good before I placed it out of the wind in a half shaded and not to hot spot in my garden. From now it was praying and hopping for the best! 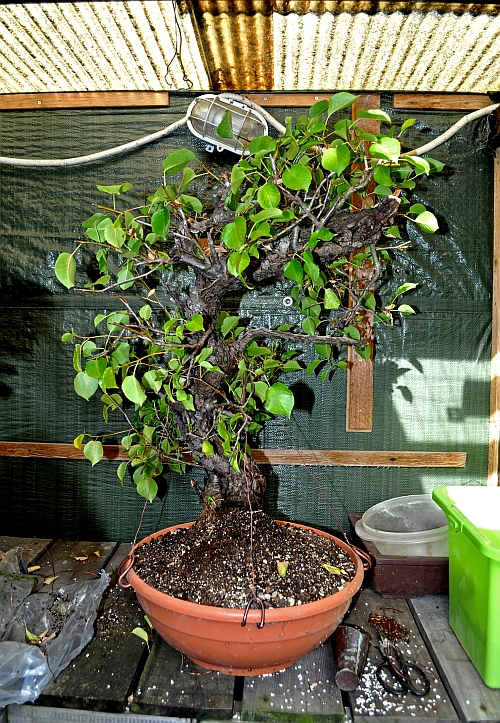 February 2017: Like every year Tony visited my house the day after the Noelanders trophy before he sails off to the UK again. We drink, eat, talk Bonsai and gossip like an old woman! And of course he wanted to see my trees and the Prunus I promised him 2 years ago! 🙂 He liked it a lot and wanted to take it home that same day! But I convinced him that it would be better to leave it for a other year in my garden so that the roots would be able to grow even stronger! That way the bumpy rite home could not harm the health of this new tree! But next February in 2018 when he visits my house again it will be his! And I think that the next couple of pictures that I shot a few days ago of this new tree and future Bonsai in full bloom, will show just why I’m sure that he will!! 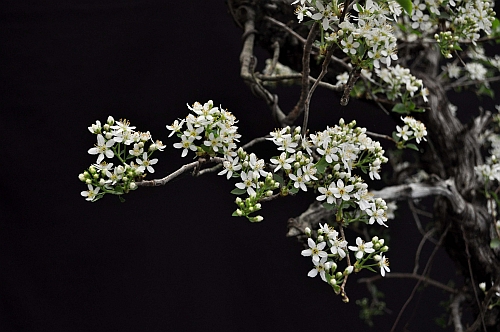 Natural deadwood is something we can never copy! Thats why working on and with these ancient Yamadori is such a honour and privilege to me!

Below: View of the stunning base. The spot were I made the air layer was carefully chosen just below this wides spot just below this little tree on the right side of it! This natural little tree is almost completely surrounded by really old deadwood and show how resilient mother nature can be! From there on up wards, it is all very old and weathered deadwood with only a small live vain running right up to the top, that keeps the rest of the tree alive! This small tree on what is really a Literati tree is very unique in my vision and, if necessary,  I will convince Tony to keep it on there! 🙂 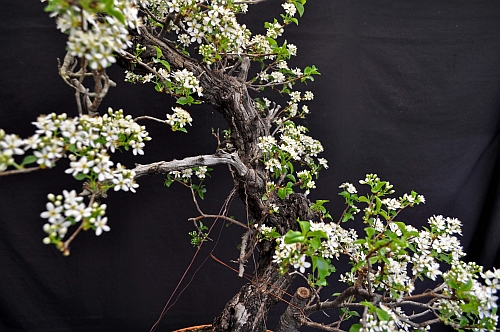 Below: Half way up the tree. Just look at the cracked, burned and naturally bleached old deadwood. This trees grew in between the man made rock land devisions and were considered a pest by the farmers on whose land they grew and were chopped and burned regularly over many decades! Thats how the  became so gnarly and full of this stunning deadwood!

Below: And finally a shot of the whole new tree and future, in my humble opinion, unique and stunning Literati Bonsai! I am really proud of it….and I hope my friend Tony will be pleased with it?! He deserves it!

I hope you enjoyed this little story?!