the last few days were really sunny over here, so I thought it would be a great opportunity to do some fun work, wile taking in some rays. Over the last 4 or 5 years, I have been taking cuttings from several Itoigawa plants. These plants them self were raised from cuttings that I took from 3 small four year old itoigawa plants that I bought over a decade ago from Danny User. I bought them because I wanted to craft them on to a Juniper that was very promising, but with the wrong kind of foliage. I used one for this purpose and sadly it failed.  Four years later after a very hot summer, it started to lose its strength and it died shortly after. The other two itoigawa I used to make tanuki from. I had some beautiful peaces of deadwood that would be just perfect. From these (now) Tanuki I took cuttings and  two air layered (new) plants. Since then I planted every little branch that I cut off, with some rooting powder in to a small plastic pot.  Or I would simply stick the small cutting into the soil surrounding one of my yamadori or pre-bonsai. Many of my larger plastic pots hold a big recovering tree that is surrounded by small cuttings! 🙂 It is surprising to see just how many of these impulse cuttings survive! So by now I was left with over 40 of these 2 to 4 year old cuttings that needed a repotting and some first styling. I freestyled them in all kind of interesting shapes, but keeping their future image in mind! It was great fun to do and I am so curious just how these little cuttings eventually will look in 10 or 15-year time? And all this future fun from 2 small plants bought over a decade ago! Bonsai fun doesn’t have to cost a lot! 🙂

Below: Most of the repotted and wired Itoigawa in one shot!

Below: One of the many pre pre pre Bonsai!

Below: This is one of the Tanuki that I started all those years ago. From this tree, many cuttings and two air layers were made! Here you can see the result of the first real styling of the branches and a freshly made air layer on one of the thicker branches that otherwise would be just cut off and thrown away! 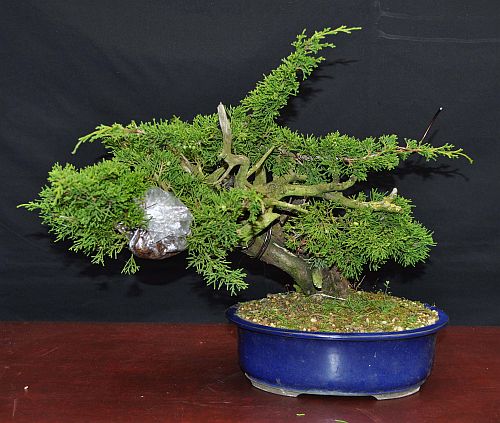 It was great fun styling these baby Bonsai!  Inlets say 10 years time  I will show you how they look, I can’t wait!  🙂

Below: This is a picture of my Ilex verbicilata urban yamadori. I bought it in 2009 and I think it is coming along nicely!