two weeks ago I repotted my small Hawthorn and I wanted to show you some pictures I shot that day. Unfortunately, it was a too big a risk to plant the Hawthorn into the planed Dan Barton pot, it was just too shallow to house the root mass that is clinging onto a large stone. So I planted it in a temporary and a bit over size pot. Next repotting I might be able to remove that rock and then I plant it in Dan’s pot!

Below: The small Hawthorn released from its ugly plastic container. 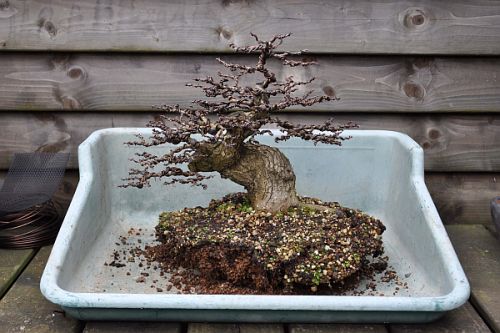 Below: A small detail I did not expect or had forgotten about! A rock holds firmly by thick roots. Those two roots (yellow arrows) might be useful in the future to replace that thick root. For now, the thick root will be shortened. 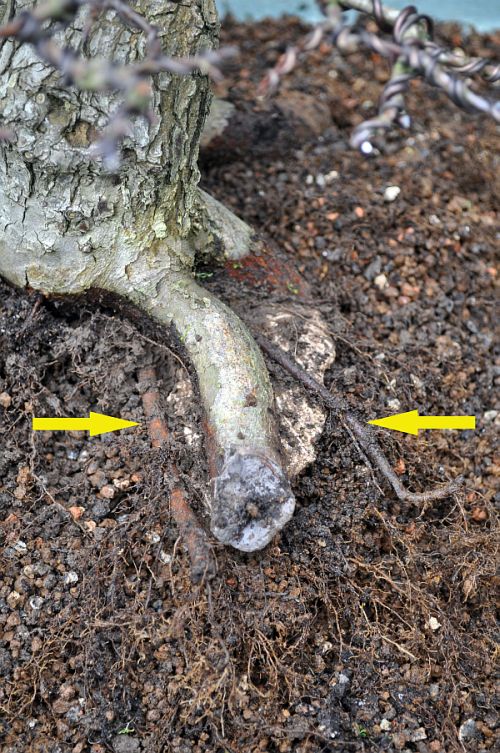 Below: The thick root shortened. (Yellow arrow) The second thick root holding one to the root is not cut back, for now, there were just too many small roots growing from it. Next repotting time, wen more fine roots have grown from the top thick roots it will be removed and then the stone might be removed as well!

Below: On the backside of the tree another thick root is shortened.

Below:  And another one is removed!

Below: After all is don, the tree gets a well-deserved shower, that removes all the dust and small particles from the soil. 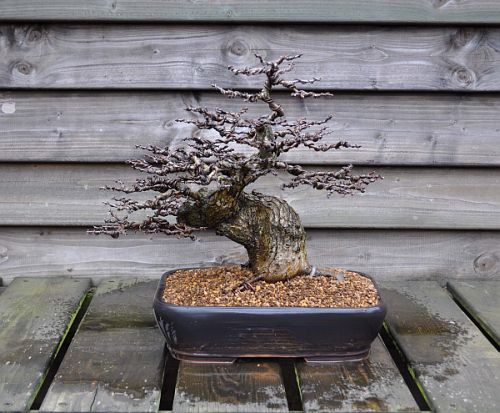 Below: This picture was made a few days later. I know that the tree needs a lot more work and that the top section needs to thicken and fill out more, But I do feel it is heading in the right direction. I love to work on Hawthorns!

Hope you like were this little Hawthorn is going?! I will keep you posted on its future developments.

6 thoughts on “PICTURES OF MY SMALL HAWTHORN IN IT’S NEW POT.”