Last week we had a spell of lovely weather, so although my back is making it hard to work for very long, I enjoyed every minute I worked on this old Yamadori, Sylvestris Pine!

Below: I scanned a before and after photograph, they were shot during the demo I did on this same Pine in Denmark in May 2000, together with the rest of the “former “Tsunami” gang. This tree was a few years earlier styled by Farrand Bloch.

Below: After that demonstration.

And here are some pictures I made of the styling work today.

Below: Because of my lower back problems I had to sit a lot during the wiring, something I normally never do. But he, the sun was shining so who is complaining!

Below: Branches that took many years to grow, had to be sacrificed, to open up the dens foliage mass a bit more.

Below: for many years this tree had been, more or less, allowed to grow freely and received nothing more than a sunny spot and a lot of T.L.C. During that time, my work was mostly focused on getting more and better ramification and foliage in the right places. Because of all this time-consuming work, I was now able to cut off some badly placed thick branches and replace them with the better placed new branches with foliage closer to the trunk. Making the tree more compact, but less full.

Below: (here the tree is seen from the back) The frond branch (A) needed to be pulled backwards considerably, but because I did not want to damage the old bark, I could not put heavy wiring on it to do the job. So I needed to use a copper wire to pull the thick branch backwards, but there was no place where I could secure the copper wire too! The only place, with the right angle, to pool the branch back from, was the corner of the pot (C). But that meant that the beautiful old bark of the trunk would get damaged by the wire at point (B) and that should be avoided at all cost, even on the backside of the tree! So I placed a long piece of metal along the back side of the tree that only makes contact with the bark at point (D) and (E), but it protects the bark from damaging at point (B). Sometimes you have to be inventive, to be creative! 🙂

Below: Finished ( for now) front side, after 8 years of work.

Below: Backside. Notice the “Komodo dragon” on top  🙂 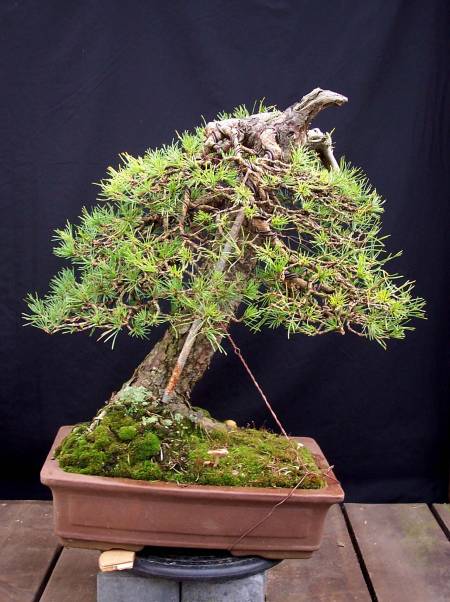 Much more work needs to be done in the future to get the tree to were I want it to be, but for now, I am pleased with the result. The tree received heavy doses of fertilizer in the later part of this growing season, to promote strong growth for next season. Most of the then hopefully strongly grown new candles, will be removed next year to promote back budding so that the tree can fill out the new canopies I created during this styling session. Yet another step in the life of this tree on its way to becoming a Bonsai.

One thought on “My first styling job of this season: A “Pinus sylvestris” Yamadori from Sweden.”