in November 2006, my dear friend Tony Tickle invited me to come to England to do the (now famous) all weekend “BURRS” workshop. I arrived a few days before all that fun would start because Tony would take me and Morten into the beautiful “Wells” mountains for a walk and to try to find some collectable “Crataegus” yamadori. Well, I got very lucky when I discovered a small one with a lot of potential! I have no pictures of the actual collecting of the tree, but this is the view from that same place where the “Hawthorn” of this story was found and without much trouble collected by me. 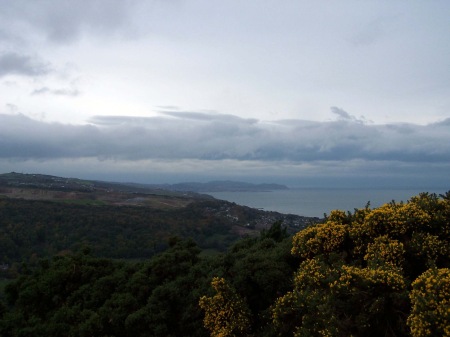 She grew on a steep mountainside in soil, consisting of almost nothing else than small rocks and gravel, from which I could almost entirely collect her with nothing more than my bare hands (that looked and felt like they had been looking for a pin in a pin stack)! Never the less, she had managed to grow surprisingly good roots, with a lot of small feeder roots growing close the base of the trunk. So I could cut the to larch roots back without causing to much harm to the health of the tree. From experience, I know that next Spring the tree will react to this hard root and branch cut back, with much growth of small feeder roots, that will secure the health of the tree, during this time it is recovering from the stress caused by collecting it and potting it. As soon as the tree was lifted from the ground the bare roots were wrapped in wet sphagnum moss and then put into a plastic bin bag that was tightly wrapped with plastic tape. Early next day at the venue in “BURRS” my good friend Terry Foster helped me to plant the tree in a plastic training pot, making sure that the tree was firmly secured to the bottom with aluminium wires. The Hawthorn stayed in Tony’s care during that winter. He placed the tree in his greenhouse on a heating bed. In February the following year, Tony came, just like me and many others, to the “Noelanders trophy” in Belgium to show his Bonsai and to meet up with all our bonsai friends from all over Europe that come there every year as well. He kindly brought along my Hawthorns I collected and so after the show they finally came home with me to my little garden in Holland. The Hawthorns ( I collected two) were placed in my greenhouse for protection during the rest of that Winter. In Spring I was delighted to see that the trees literally burst out with new buds all over. I removed all the buds that were unnecessary for my design from the trunk, simply by rubbing them off with my fingers. Leaving unwanted buds to grow will take the strength away from other more important buds and will leave unwanted scares in your trunk. The tree was allowed to grow freely the next growing season, in a semi-shaded place in my garden. In the next picture from August that year, you can see that she was doing really well and I knew then that I could safely give it here first styling at the end of the winter before the buds start swelling.

And this is how the tree looked in February 2008 before the work started. 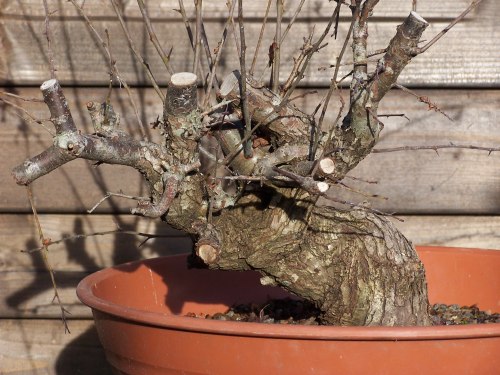 OK, before I start to work: have a look at the next two pictures of the front and back of the tree and try to discover the future  design I discovered in this little “Hawthorn”

Have you found it? This is what I have in mind: 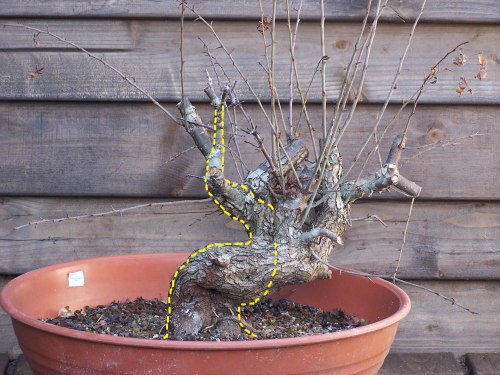 To reach this ideal profile or frame, I had to do some major branch cutting! Always trying to leave as little wounds as possible, where there was no room for some deadwood/Shari on the trunk.

As you can see in the pictures below, the yellow cuts were not much of a problem to do, but the red cut was a bit harder to reach with cutters or normal saw!

First, all the excess branches were cut off, so I could get a  good firm hold on the tree, while I was sawing away, without pricking myself a thousand times! Then, with the help of a very sharp small bladed woodcutters knife, that is used by foresters, I was able to remove the thick branch in one go. 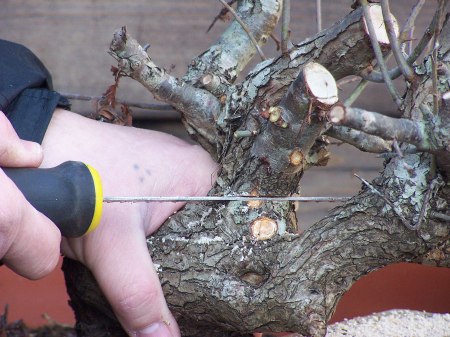 Then one by one and bit by bit all the other useless branches were cut back. 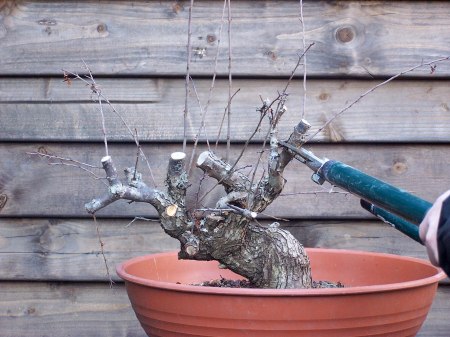 A  large branch cutter, like  I use here, is a priceless tool for this kind of work! It makes a clean cut in one go, without placing to much sideways force on the tree and roots, like a saw or power tool does. No matter how good you think you hold the tree in place! 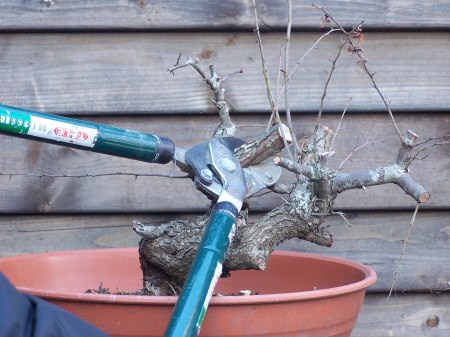 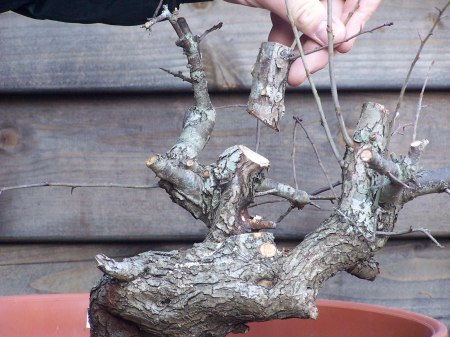 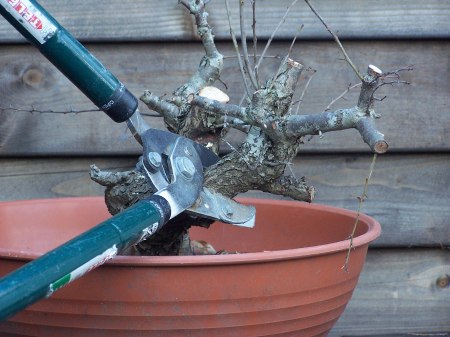 Slowly, with every cut, the new shape of this tree is revealed! All wounds are worked over with concave cutters to promote better wound healing. So that in a few years,  the tree is left with large, but natural looking scares, that can be seen on every Hawthorn here on the coastline.

After all the wounds were cut back sufficiently, they were sealed with cut paste. The large wound on the left of the tree (middle picture) is cut back to about 2,5 cm/1 inch of the truck. In the future, this stump will be worked into a small Jin + Shari or maybe only a   Shari? But this work is left for the future! Because doing it now and then leaving such a large open scare, right on the trunk line, could cause die back in the trunk! Every large wound that is left exposed to the elements; will dry/die back,    interrupting the sap flow between roots and branches! Which could kill your branches and roots or even your whole tree! Because I left the bark on this little stump, it will stay alive for a long time, preventing the possibility of trunk die/dry back!  The tree will probably even throw out a bunch of strong shouts along the rim of the wound, the tree’s own bandage! A sign the tree’s sap stream is pumping along the wound. Only after the tree has shown these signs of full recovery, will I start to take that stump away, bit by bit. 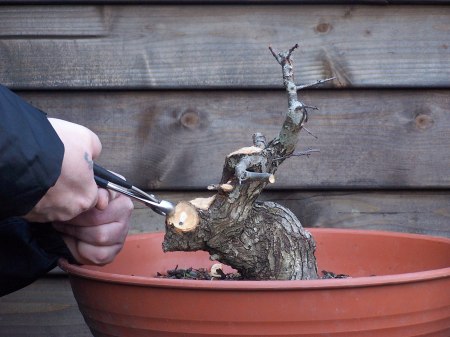 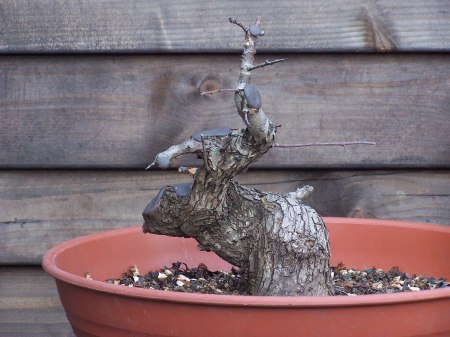 For now, I’m really pleased with the outcome of this little Hawthorn, I love it’s movement and bark texture. I am really looking forward, to next season to see where all the buds will appear! If I’m lucky they will grow just about where I need them.  And if not….who cares? Together, we will think of something.

I hope you liked what I did so far? And I will keep you all posted on this little tree’s progress.

4 thoughts on “A short “Crataegus” story.”